The gold accolade for our work with Blackpool Pleasure Beach recognised the outstanding results achieved for ‘An Icon is Born, a campaign unveiling the name of the leading amusement park’s much-anticipated new £16.25m rollercoaster, due to launch in Spring 2018.

Judges said: “This was an innovative campaign that took the difficult scenario of nothing to show and used multi-media and motion graphics to enhance media content and gain a huge amount of quality media attention in the build up to a new rollercoaster ride being ready for launch. A very effective use of the budget and clear measurable results on media coverage.”

It was one of a hat-trick of achievements for Rule 5 with the agency’s work with premium cycling brand Fat Lad At The Back also recognised in the Best Community Relations and Best Sport, Art and Culture categories.  Both saw the agency presented with silver awards.

Speaking on the success Rule 5 Founding Director Jules Wilson said:  “We’re incredibly proud of the work we deliver for our clients.   To have that work recognised by your industry peers is however fantastic.  The calibre of entries shortlisted this year was exceptionally high and we’re thrilled to have received three accolades.”

Rule 5 Founding Partner Rob Brown added: “The Best Use of Media Relations award is widely recognised as the most hotly contested category.  To receive this award for our work with Blackpool Pleasure Beach is a real achievement and one we’re incredibly proud of. “

Rule 5 is delighted to have played a key role in bringing together two sporting heavyweights in a campaign to raise funds for national head injury charity Headway.

The campaign saw leading cycle wear brand Fat Lad At The Back (FLAB) and Super League rugby league side Huddersfield Giants join forces to raise awareness of the worthwhile cause in memory of Giants youth player, Ronan Costello, who sadly passed away last year further to sustaining a terminal brain injury during a match.

In a touching tribute to the young player, seven Giants members of staff, including ex-England player and club ambassador Eorl Crabtree, took upon a sporting challenge of a different kind and embarked on a 120 mile fundraising ride to Newcastle, ahead of major rugby league event Magic Weekend.

They were supported on the journey by FLAB co-founder Richard Bye, who ensured Ronan’s story reached all that passed, with an exclusive charity branded cycle jersey and short worn by all.

Rule 5 was thrilled to support the campaign at every stage, from the brokering of the partnership through to the delivery of an impactful national and regional media campaign. Extensive coverage was enjoyed and included Sky Sports News, BBC One, ITV1, multiple regional radio appearances, and national and regional sports and news titles.

You can support the fundraising campaign, and donate in memory of Ronan Costello to the charity Headway, by visiting www.justgiving.com/magicweekend2017 or texting 70070 with code RLFC50 followed by £**, entering value you wish to donate. 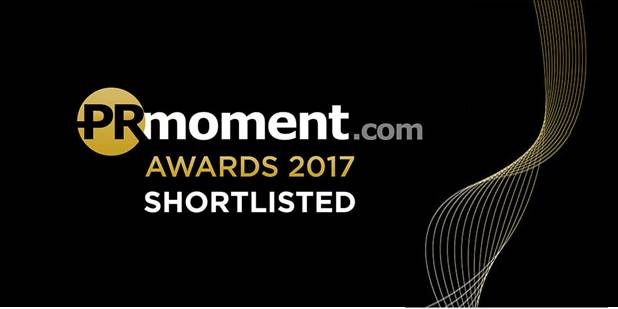 The agency has been shortlisted four times in this year’s PRmoment Awards.

Shortlisted entries include campaigns for The 2016 Track Cycling World Championships (x2) and premium cycle wear brand, Fat Lad At The Back.

The PRmoment Awards recognise the very best communications and PR professionals across the UK and are judged by eminent industry representatives.  This year’s awards saw over 850 entries.

Results will be announced at an awards dinner at the Hilton Manchester on March 16.

Based in Bingley, West Yorkshire, Hangfast is one of the world’s leading manufacturers of climbing walls, artificial caving systems and rope courses, providing end-to-end adventure leisure solutions from design through to production and installation.

The specialist business, founded by John Beers in 2001, works with a wide range of clients including Sport England, the armed forces, schools, outdoor education and leisure centres, and leisure and tourism attractions like Legoland and Alliance Leisure.

The appointment sees Rule 5 responsible for raising awareness of the business, working with Hangfast’s clients to deliver effective marketing communications strategies.  The agency will also work with Hangfast to promote its rigging and rope access business, which provides a comprehensive range of inspection, maintenance, lifting and materials handling solutions to the entertainment, construction, maintenance and climbing industries.

Speaking on the appointment, Hangfast founder and director John Beers said:  “Since the inception of Hangfast in 2001 we have been quietly building the business, delivering bespoke adventure leisure experiences for customers worldwide.  As we celebrate our 15th anniversary we’re looking ahead to the next phase of expansion, with a marketing and communications campaign that will further elevate the Hangfast brand.

“Rule 5’s strategy demonstrated knowledge not only of the media opportunity but of our business and the adventure leisure sector.   They’re a great fit with Hangfast and we’re really pleased to have the team on board.”

Rule 5 Founding Director, Julie Wilson, added:  “Hangfast is a fantastic win for the agency playing to our strengths in sport and leisure PR.  It’s an incredible business that’s brimming with potential stories; we’re delighted to have the opportunity to tell them.”

It feels like only yesterday when the Rule 5 team, British Cycling and riders from 42 nations congregated at the Lee Valley VeloPark in London for the 2016 UCI Track Cycling World Championships.

The biggest track cycling event of its kind in the modern era, over 52,000 spectators descended upon the capital for five days of action-packed racing to see Great Britain’s track stars, including Sir Bradley Wiggins, Mark Cavendish, Jason Kenny, Owain Doull, Laura Trott and Becky James, compete against the world’s best for the coveted rainbow jerseys and the chance to gain crucial qualification points for Rio 2016.

A team of five worked shifts throughout the week to manage two full service press rooms and produce live social media content on Twitter and Facebook. The social media campaign incorporated engaging video content and photography with new technologies and platforms helping us reach an astonishing global audience approaching half a billion impressions on social channels.

Medal wins from Great Britain’s men’s and women’s team pursuit teams, plus Laura Trott in the omnium, Jon Dibben in the points race and Sir Bradley Wiggins and Mark Cavendish in the Madison on the final day of racing provided electrifying content.

A single image of Sir Bradley Wiggins kissing the forehead of Mark Cavendish after their gold in the Madison event gained 8,887 likes on Instagram, was shared 147 times on Twitter and 233 times on Facebook.

Social coverage was monitored using Facebook Insights and Tweet Binder, which allowed the Twitter statistics to be tracked in real-time. Over 62,000 tweets used the hashtag #TWC2016, reaching 68.9 million people and generating 434,185,086 impacts.

This weekend saw the return of one of the UK’s most respected cycling events, the Virgin Money Cyclone Festival of Cycling.

Staged in beautiful Northumberland, the Cyclone caters for cyclists of all abilities, with leisure rides, Challenge rides and elite racing all packed into three days.  It is the second year that Rule 5 has been involved, driving and delivering the pre-event and live weekend communications campaign on behalf of Virgin Money.

Event activity opened on the evening of Friday 19th June with over 300 friends, families and solo riders soaking up the festival atmosphere and embracing the Tyne Six Bridges leisure rides.

On Saturday it was the turn of the more experienced rider, with over 2,300 cycling enthusiasts getting into the saddle to test their stamina in the Virgin Money Cyclone Challenge rides.  Weather conditions were variable but nothing could dampen the spirits of the riders as they embraced the 34, 64 and 106 mile routes, many in aid of charity.

Sunday’s elite races, the Curlew Cup and UCI Beaumont Trophy, saw some of the world’s best riders descend on the picturesque Northumberland village of Stamfordham.

Taking the trophy in the National Women’s Road Race, the Curlew Cup, was team IKON-Mazda cyclist, Laura Massey, with Christopher Latham of the Great Britain National Team powering to victory in the UCI Beaumont Trophy.

We were thrilled to be at the heart of all of the action, managing the media, realising the potential of every opportunity and activating the event’s social channels.

We’re no strangers to Instagram in the office. It’s probably one of the “cooler” user-friendly photo and video-sharing apps on the market. Simply take a snap, add a little oomph with your favourite #filter – ours is Mayfair if you’re asking – type a witty caption, then share it with your followers. Don’t forget to post it on your Facebook, Twitter, Tumblr and Flickr accounts too…extra likes never hurt anyone.

So when a quick #layout search brought up over 230,000 posts (selfies and food pictures galore) within days of Instagram rolling out the app to iPhone users this week, we had to take another look.

According to Instagram’s latest blog post, Layout is fun, simple and gives you a new way to flex your creativity.

Users are shown previews of custom layouts – now we understand the name – as you choose from photos from your camera roll. Drag, drop, pinch, zoom, flip and rotate. Complete artistic control is at your fingertips.

Currently a standalone app, an added perk is that you don’t need to have an Instagram or Facebook account to use it. Once you’ve saved a collage, it can be emailed, sent by text or shared to apps including WhatsApp and Dropbox.

A curious drawback is Layout’s cumbersome mismatch with Twitter. Sharing images directly to Facebook or Instagram is simple, but Twitter users have to save collages to their camera roll before posting. This is a continuation of Instagram’s decision in 2012 to stop images shared from its main app showing within tweets.

We must admit our initial thoughts were that Layout was aimed at the selfie obsessed. Nine pictures to a collage must be their dream come true. That was until we saw a collage of American First Lady Michelle Obama on her official visit to Japan and Cambodia.

Dignitaries aside, it seems Layout has been quickly embraced by well-known brands & marketers too with Victoria Secret and Sephora amongst the early adopters.

On the sporting front we’re looking forward to testing Photo Booth’s time-lapse feature, which provides the opportunity to capture movement in a short space of time.  The forthcoming 2015 BMX Supercross World Cup in Manchester will present just the right opportunity.

Our verdict? If it’s good enough for the First Lady of the United States and 300 million active users, it just might be good for enough for us.

Rule 5 has been shortlisted five times in the Northern Digital Awards.

The awards recognise the very best in digital marketing campaigns and talent in the North and will be staged at the Royal Armouries in Leeds in January 2015.

Rule 5 has received nominations in each of the five categories entered, including the Best Digital Marketing Campaign – Entertainment/Sports, Best Use of Social Media, Best Use of Video and Small Digital Agency of the Year.

Recognised campaigns include the agency’s work for the UCI Track Cycling World Cup, for which Rule 5 receives three nominations, and the launch of Royal Albert’s Miranda Kerr range.

Both campaigns are nominated for Best Use of Social Media, a category the agency won at this year’s Big Chip Awards.

We are thrilled to have made the shortlist of the Northern Marketing Awards.

The awards champion the work of some of the UK’s biggest brands and this year attracted over 200 entries.

The nomination for Sport Campaign of the Year features the agency’s work on the inaugural World Taekwondo Grand Prix, pitted against Manchester City FC and Salford Red Devils.  Rule 5 is also nominated for Social Media Campaign of the Year, a category that it won at this year’s Big Chip Awards and the Chartered Institute of Public Relations (CIPR) PRide Awards last November.

The agency is already shortlisted for Best Social Media Campaign and Outstanding Consultancy in this year’s PRide Awards.

The Northern Marketing Awards will be announced on October 16.